They Were Set Ablaze: The Story of Misha Levine and Lithuanian Jewry during the first half of the 20th century

“Amidst the shouting and barking, cracking of whips and thud of the clubs, Beila and the children craned their necks to look for me. For a fraction of a second, through a sliver in the crowd, Sara’le and Hillel’s terror-filled eyes locked with mine as they were clinging to Beila and each other. That fleeting final glimpse of them is branded onto my soul. It will haunt me for as long as I am alive. Eyes begging me to save them. I could not. They were gone, engulfed by the chaos.” … Misha Levine, in the Stutthof Death Camp, July 17, 1944.
Misha Levine, born and raised in Vilna at the turn of the 20th century, recounts poignant memories from Lithuania buried deep within. Known as the “Jerusalem of Lithuania”, medieval Vilna was also modern and sophisticated – the uncontested epicenter of East European Jewry. Time and again Misha was caught up in events that toppled all but the strongest of body and spirit. His moving tale of survival is also a rare window into the Lithuanian Jews’ trials during the turbulent first half of the twentieth century: the Russian Revolution, World War I, the Bolshevik Revolution, the Spanish Flu epidemic, war with Poland, three wars for Lithuanian independence, the Russian invasion and the Nazi Blitz Krieg takeover – culminating in the Holocaust and its aftermath. A higher percentage of Jews were murdered in Lithuania than anywhere else in Europe: an astounding 96.4%.Benjamin Levine, the author of They Were Set Ablaze and Misha’s son, wrote this story in the voice of his father providing a unique portrayal of events branded into Misha’s soul: the nationalist Nazi collaborators’ murder squads, the Shavl ghetto and three concentration camps, Stutthof, Dachau and Mühldorf.After unspeakable horrors, including the murder of his wife and two children, Misha found the capacity to love again. After the war, he met a beautiful Lithuanian survivor, two decades his junior, in Munich – birthplace of the Nazi movement. She, too, had the strength and courage to miraculously withstand the Kovno ghetto, Stutthof Concentration Camp, from where she made a daring escape, and her Russian liberators.Did they have the resilience to rekindle a will to live … would their love be enough to fan the flame of hope necessary to marry and raise a new family after all they had endured?

2 reviews for They Were Set Ablaze: The Story of Misha Levine and Lithuanian Jewry during the first half of the 20th century 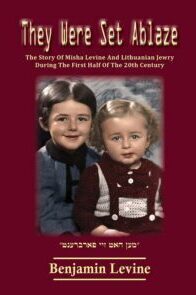 You're viewing: They Were Set Ablaze: The Story of Misha Levine and Lithuanian Jewry during the first half of the 20th century ₪69.00
Add to cart