Unlocking The Past: Stories From My Mother’s Diary (Hebrew)

THIS PAGE IS FOR THE HEBREW EDITION of  Unlocking The Past: Stories From My Mother’s Diary

Shira Sebban had long abandoned hope of uncovering more details of her mother Naomi’s past, especially after her death in 2013 following a long battle with Alzheimer’s disease. That was before Sebban and her sister discovered a diary Naomi had kept during a study trip to Israel in the mid-1950s.

Unlocking the Past: Stories From My Mother’s Diary brings Naomi’s vibrant and descriptive diary entries back to life as a series of creative non-fiction short stories. In so doing, Sebban embarked on a fascinating journey, exploring a place and space so different to her own. Not only was her mother still single, but she had also become somewhat of an outsider, having returned to her birthplace after a decade away in Australia. Covering an 18-month period, from late 1955 until mid-1957, beginning with Naomi’s arrival in the then divided city of Jerusalem to take up a scholarship at the Hebrew University, the chapters portray what life was like in the new State of Israel, particularly in Jerusalem and Tel Aviv.

Disparate events are covered, from social, cultural and political public happenings to more personal concerns like love and loss. Naomi’s friends included future advisor to Margaret Thatcher, Alfred Sherman, renowned concert pianist, Nelly Ben-Or, and Ilan Hartuv, now best remembered as one of the Entebbe hostages, whose elderly mother, Dora Bloch, was among those killed. Importantly, we gain an understanding of what it was like to be a single, young and intelligent woman during the foundation years of Israel.

2 reviews for Unlocking The Past: Stories From My Mother’s Diary (Hebrew) 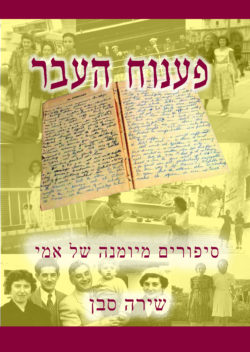 You're viewing: Unlocking The Past: Stories From My Mother’s Diary (Hebrew) ₪69.00
Add to cart