To Whom Was The Promised Land Promised?: Some Fundamental Truths About The Arab-Israeli Conflict

To Whom Was The Promised Land Promised? – Some Fundamental Truths About The Arab-Israeli Conflict stands alone in its field. For anyone seeking information or guidance on the Arab-Israeli century-long conflict, this book will be the first book to consult.
The object of Abraham Sion’s research is to ascertain ownership of the legal right to the territory of Mandatory Palestine under international law. The two competitors were the Arab nation on the one hand and the Jewish people on the other. The author juxtaposes the legal rights of both parties to make this determination.

Sion’s research is concerned with the legal aspects of the conflict. He does not seek to establish who is morally right or wrong, or who has been the aggressor or the victim among the parties, even though these attributes can be sporadically deduced from the historical facts presented in this work.

In the same vein, the book is not a political dissertation. It does not consider the issue from a political point of view, e.g., whether territories captured during the Six-Day-War should be exchanged for peace or whether a Palestinian State should be established in the West Bank and the Gaza Strip.

Be the first to review “To Whom Was The Promised Land Promised?: Some Fundamental Truths About The Arab-Israeli Conflict” Cancel reply 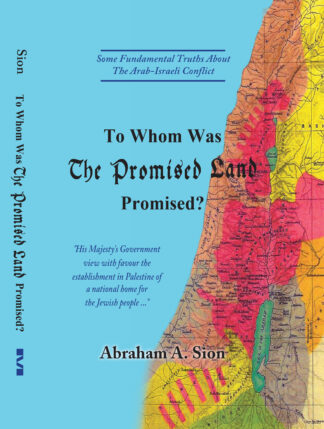 You're viewing: To Whom Was The Promised Land Promised?: Some Fundamental Truths About The Arab-Israeli Conflict ₪120.00
Add to cart