Peter Bergson – The Jewish Lobbyist Who Advocated To Save Jews During the Holocaust is the story of a modern Jewish hero’s efforts to rally the United States government under the leadership of President Franklin D. Roosevelt, to make a significant attempt to save Jews from the Nazi “Final Solution” exterminations program which engulfed European Jewry in the early 1940s.
Peter Bergson (born Hillel Kook) was among the first Jews to internalize the facts that the Germans were murdering Jewish men, women and children throughout German-occupied Europe. He understood that this was not a time for business as usual and did everything he could to call attention to the plight of the Jews and to plead for their rescue. He advocated, lobbied, organized, and publicized his message, to rescue the Jews from the murderous German Nazis, trying idea after idea.

The author, Dov Peretz Elkins, describes the one success of all the rescue efforts – the appointment of a War Refugee Board which saved as many as 200,000 Jewish lives.

This book makes clear that human failures enabled the Nazis to operate with little resistance from America (as from the Allies and bystanders in Europe.) Especially in light of the resigned cynicism that often meets claims of human rights violations today, the story of Peter Bergson is important to retell.

Written in a manner accessible to young people and also of great interest to adults, Elkins reminds us that Germany’s intentions were no secret, that American Jewry did not do enough to help, and that one man can make an extraordinary difference. 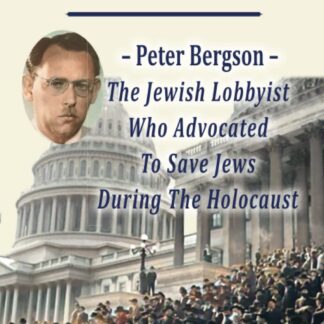 You're viewing: Peter Bergson – The Jewish Lobbyist Who Advocated To Save Jews During the Holocaust ₪59.00
Add to cart