The Jericho Scrolls: Stories Josephus Could Not Tell About Eretz Israel!

Guria Julius Antigonos documents the Roman holocaust of the Jewish People and the struggle under his leadership to establish a democratic government within the “Promised Borders” of Israel.

“The Jericho Scrolls”, which are the historical recollections of Guria Julius Antigonos – Statesman, Roman Knight and Jewish Leader – were just found by an antique dealer in Jericho, buried in a leaden chest sealed with tar from the Dead Sea. Now documented, these diaries, which comprise eight scrolls of delicate Egyptian papyrus, were written and completed 1,900 years ago.

Guria’s historical diary creates a turning point for everything known until now about Jewish and world history during the second half of the first century of the current era. In fact, the diary includes stories that Josephus Flavius could not tell about the Jews. A surprising similarity and parallel between the social and political events that occurred in the State of Eretz Israel, post Second Temple destruction, and the events occurring in the present day State of Israel emerges from this historical novel.

Discerning readers will find “The Jericho Scrolls” to be one of the most fascinating documents of the century.

Be the first to review “The Jericho Scrolls: Stories Josephus Could Not Tell About Eretz Israel!” Cancel reply 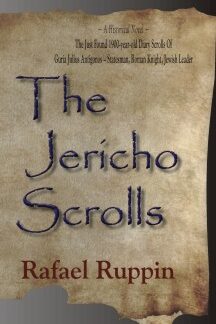 You're viewing: The Jericho Scrolls: Stories Josephus Could Not Tell About Eretz Israel! ₪150.00
Add to cart