View cart “The Jericho Scrolls: Stories Josephus Could Not Tell About Eretz Israel!” has been added to your cart.

The Friendship That Shaped Jewish History

The Friendship That Shaped Jewish History is the story of one Jewish man, Eddie Jacobson, who influenced his lifelong friend, Harry S. Truman, who had become President of the United States, to recognize David Ben-Gurion’s provisional government as the de facto authority of the new State of Israel.

It is not widely known, but if it were not for Jacobson’s connection to Truman, the opposition might have been able to block the Jewish country’s rebirth.

Rabbi Dov Peretz Elkins encapsulates the history of these two men, and how each accepted their responsibilities in the roles for which they were positioned for re-establishing the Jewish Homeland after 2000 years of dormancy.

“Few friendships in all of American Jewish history have been as impactful for Jews as the one between Eddie Jacobson and Harry S. Truman. Dov Peretz Elkins ably recounts the story of that friendship and what it meant for the emerging State of Israel. An inspiring story.”

“My wife and I prayed to God to grant you health and guidance – courage I knew you always had. Many great things have happened in these few years. One of them, the answer to the prayers of my people, who for over 2000 years prayed for a home of their own, and through you, their prayers were answered.”

“Only the most intimate friends knew the extraordinary role that was played by you in swinging the scale in our favor when the future looked so precarious and ambiguous.” 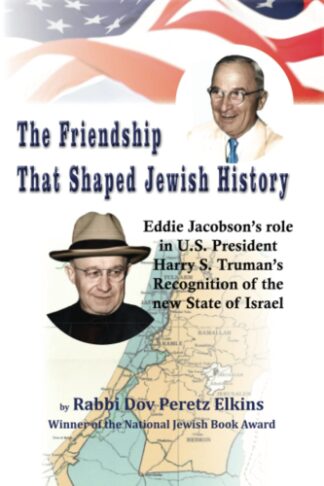 You're viewing: The Friendship That Shaped Jewish History ₪59.00
Add to cart