The author, Déborah Wolkowicz-Breillat, examines, first, what really happened during Israel’s Six Day War in 1967, after which the captured territories were called “occupied” and second, the judgment of the International Court of Justice, which set out to prove that it was justifiable to employ the word “occupied.” She clarifies the legal jargon of the International Court of Justice to verify if the principle of objectivity has been respected.In closing, Déborah Wolkowicz-Breillat writes: “When an Institution created to ensure that the law is always stronger than brute force, whose very essence is to respect the law, can lose itself so, it is an entire civilization which has lost its bearings.”Maps are included. Also included in this book is the text of the United Nations Security Council’s Resolution 242 (1967), the declaration of the United Nations on the Rights of Indigenous Peoples, and the ratings of 210 countries by Freedom House on people’s access to political rights and civil liberties, categorized by “Not Free”, “Partly Free”, and “Free”.

Déborah Wolkowicz-Breillat, with higher education in Law and History, is an activist for the defense of Israel. Self-taught on the functioning of the United Nations, she has been the Permanent Representative of an NGO to the United Nations in Geneva and New York.

Be the first to review “The United Nations Impartial?: United Nations: Its International Court of Justice Towards Israel” Cancel reply 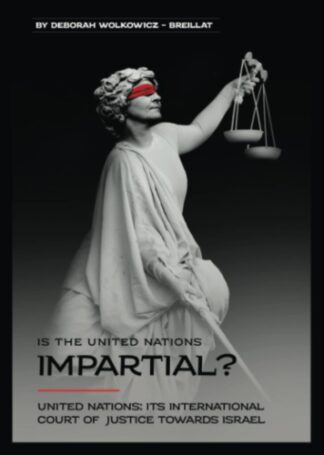 You're viewing: The United Nations Impartial?: United Nations: Its International Court of Justice Towards Israel ₪69.00
Add to cart